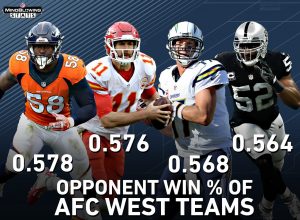 For all the buzz around the other teams in the division, it gets easily overlooked that the Kansas City Chiefs are the reigning division champions, coming off a 12-4 record last year. But the question around the Chiefs is whether this team can take that next step forward and make a deep postseason run, or will they take a step back given all the questions they have on offense. The defense shouldn’t miss a beat, with as many as five Pro Bowl-caliber players on defense — cornerback Marcus Peters, safety Eric Berry, outside linebackers Tamba Hali and Justin Houston, and inside linebacker Derrick Johnson — along with an emerging stud in defensive end Chris Jones, and a very solid free agent acquisition in defensive tackle Bennie Logan. But the offense, which ranked in the bottom half of the league in total yards (20th) and passing yards (19th) per game, has plenty of questions left to be answered this season. How does the Chiefs selection of quarterback Patrick Mahomes with their top pick in the 2017 NFL Draft affect the play of quarterback Alex Smith, whom Mahomes was drafted to replace? How will the Chiefs running game fare with rookie Kareem Hunt (the team’s 3rd round pick) taking over for Spencer Ware, who was lost to a season-ending injury in the preseason? And does the team have any receiver they can reliably trust, outside of Tyreek Hill, after releasing Jeremy Maclin in the offseason? It’s going to take every ounce of guidance that head coach Andy Reid can muster to get this team to the heights that many believe they’re capable of, given the aforementioned challenges.

Nobody will question whether the Oakland Raiders will have the capability to move the football and score a lot of points with their offense. Derek Carr is one of the most exciting young quarterbacks in the league. Michael Crabtree and Amari Cooper are one of the most productive wide receiver duos in the NFL. The offensive line doesn’t get quite as much credit as it should, but it’s easily one of the three or four best units in the league. The unretired Marshawn Lynch should, at least in theory, provide some punch to the running game. No, the thing that everyone will question is whether Oakland can stop anyone from moving the football up and down the field against their defense, which finished last season giving up the seventh-most yards per game in the league last year. While the team used six of their nine draft picks in the 2017 NFL Draft on defensive players, the unit remains largely the same as the group from last year. Will the continuity, coupled with the addition of John Pagano as the Assistant Head Coach — Defense, be enough to get a serviceable performance from that side of the ball?

Less than two years removed from winning the Super Bowl, the Denver Broncos now find themselves amidst a major transition in the team’s direction. Gone are surefire Hall of Fame quarterback Peyton Manning, head coach Gary Kubiak, and venerated defensive coordinator Wade Phillips. New head coach Vance Joseph seemingly has his hands full, with a team that has a bevy of talented players, but a roster that’s been slowly depleted because of free agent defections and ineffective draft classes. The team’s calling card will remain its defense, considering the team still has the best pure edge rusher in the NFL (Von Miller) and the best pair of cornerbacks in the league (Aqib Talib and Chris Harris Jr.), but it may not be safe to assume they’ll be just as dominant has they have been in years past, considering how many key veterans they’ve lost from that group in recent years — most recently safety TJ Ward, whom the team released just days before the 2017 roster cut down date. On offense, the team still has yet to find it’s answer at quarterback, as they’ll continue to start Trevor Siemian under center, behind an offensive line that still has plenty of questions of its own.

The Chargers, who officially moved to Los Angeles this past offseason, will also have a new head coach along with a new home town. After parting ways with Mike McCoy, they brought in Anthony Lynn — the former interim head coach of the Buffalo Bills — as the new lead man, along with Gus Bradley as the new defensive coordinator. Lynn helped guide the Bills to the top-ranked rushing offense in the NFL in 2016, which only bodes well for running back Melvin Gordon, who enjoyed a breakout season of his own last year. On defense, Bradley will oversee a defense featuring breakout edge rusher Joey Bosa — the Defensive Rookie of the Year last year (voted by his peers) — and Melvin Ingram, along with cornerbacks Jason Verrett and Casey Hayward (the latter of whom led the NFL in interceptions last year). With Philip Rivers under center, the return of Keenan Allen at wide receiver, and second year tight end Hunter Henry emerging as yet another red zone weapon, the Chargers could be the biggest wildcard of this division, and a darkhorse playoff contender.

Coach Kyle Shanahan is Helping the 49ers to Believe
How to Mathematically Create and Use NFL Power Rankings
FF-Winners.com Releases 3 Players to Avoid Like the Plague in 2017!
PODCAST: Two Humanoids Pick NFL Week 13 Against the Pointspread
Tampa Bay Buccaneers On the Move Up the NFL!
WATCH: New England Choke On the Steelers
previous post VIDEO PLAYBOOK: Hate Punting? Fake It!
next post ALERT: FF-Winners.Com Warns On the 2017-8 Falcon Team: TAKE THE UNDER!
Back to top
mobile desktop