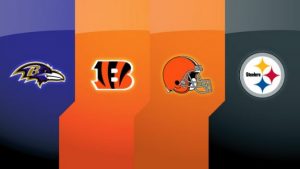 The AFC North is another one of those divisions which, theoretically, could be up for grabs for (almost) anyone… except the poor Cleveland Browns, of course. After all, the division hasn’t had a back-to-back champion since 2011 and 2012, when the Ravens won the title both years and ended up winning the Super Bowl after the second division crown), and Pittsburgh and Cincinnati have spent the past four seasons handing the division crown back and forth each year since.

This year, the Steelers head into the season as the favorites to win the division, and make their fourth straight appearance in the postseason. After briefly (but legitimately) contemplating retirement during the offseason, quarterback Ben Roethlisberger will be back to orchestrate an offense that finished seventh in the NFL in yards per game last year, and fifth in passing yards per game. Plus, with Le’Veon Bell primed to be available right from the regular season get-go (for the first time in his career), and with the return of wide receiver Martavis Bryant from a season-long suspension (after violating the league’s substance abuse policy), there’s a very good chance that Pittsburgh’s offense could be even more prolific this year. True to the franchise’s long-time modus operandi, they spent their top pick in the draft on a defensive player — outside linebacker T.J. Watt from the University of Wisconsin — for the fifth straight year, as they continually rebuild a defense that was very “un-Pittsburgh-like” in it’s 2016 performance, ranking in the bottom half of the NFL in rushing yards (20th), passing yards (17th), and points allowed (23rd) per game. For a team with a history of totally stifling opposing offenses, time is running out for defensive coordinator Keith Butler — and head coach Mike Tomlin, who installed Butler in place of the venerated Dick LeBeau — to stop this group from being the hindrance from being a real contender in the AFC.

Despite finishing the 2016 with only six total wins, the Cincinnati Bengals still lurk as a team with the potential to steal back the division crown from Pittsburgh. He doesn’t quite have the same supporting cast as Ben Roethlisberger in Pittsburgh, but the Bengals have quietly assembled a very talented group of pass catchers around quarterback Andy Dalton, including superstar wide receiver AJ Green, second year receiver Tyler Boyd (Cincinnati’s second round pick in 2016), veteran Brandon LaFell, newcomer John Ross (the ninth overall selection in the 2017 NFL Draft), and tight end Tyler Eifert (who has the most touchdown receptions of any tight end in the NFL over the last two seasons). Cincinnati’s rushing offense was already in the top half of the league last year (13th in rushing yards per game and tied for 6th in rushing touchdowns), and with the addition of second round pick Joe Mixon, it should be even better.  On defense, Cincinnati will rely on (young) quantity versus quality, largely built on their recent years of good drafting. Edge rushers Jordan Willis (their 3rd round pick in the 2017 NFL Draft) and Carl Lawson (their 4th round pick in the 2017 NFL Draft) will come in on passing downs opposite of ace edge rusher Carlos Dunlap. In the secondary, cornerbacks Dre Kirkpatrick, William Jackson III, and Darqueze  Dennard — all first round selections in the five drafts prior to 2017 — gives the Bengals as deep a group of cornerbacks as any in the NFL.

Five years removed from a Super Bowl victory, the Baltimore Ravens find themselves at a bit of a crossroads. Despite year after year of savvy drafting by General Manager Ozzie Newsome, this team perpetually seems to running in place, never able to take that next step towards being in the mix among contenders in the AFC.  Things have not fared well for the Ravens heading into the 2017 season. Quarterback Joe Flacco hasn’t been able to practice at all during training camp, thanks to back soreness that has been lingering since July. Starting inside linebacker Zachary Orr retired right after the 2016 season due to a spinal condition. John Urschel, who was slated to be the team’s starting Center this year, abruptly retired in the offseason amidst concerns around CTE. Running back Kenneth Dixon, who was supposed to work in tandem with Terrance West in the backfield this year, was first suspended for four games to start the year, and then declared out for the year after undergoing knee surgery. Wide receiver Breshad Perriman, the team’s top pick in the 2015 NFL Draft, continues to struggle to stay healthy. Baltimore’s defense has some interesting pieces, including stud middle linebacker CJ Mosley, pass-rushing stalwart Terrell Suggs, the immovable Brandon Williams (one of the best defensive linemen in the NFL that nobody talks about), and free agent signees Eric Weddle and Tony Jefferson. But that might not be enough for the perennially heralded Baltimore defense, if the offense continues to struggle to put points on the board.

And then, as always on the bottom of the AFC North, there’s Cleveland. In fairness, this is only year two of the total renovations this team undertook starting last offseason. Unfortunately, the product on the field last year reflected that, culminating in their 1-15 record (and questions as to whether head coach Hue Jackson should be fired after just one year on the job). Their league-low win total did secure them the right to draft defensive end Myles Garrett from Texas A&M University with the #1 overall pick in the 2017 NFL Draft, and make him one of the central cornerstones of their rebuild. There are interesting players on this roster. Joe Thomas and Joel Bitonio might be the best left guard and tackle combination in the NFL. Running back Isaiah Crowell finished just shy of 1,000 yards rushing last year, and Duke Johnson Jr. finished 7th in the NFL in most catches by a running back. Linebacker Jamie Collins, acquired from the New England Patriots during the 2016 season in exchange for one of the bevy of draft picks the Browns have, is one of the most talented linebackers in the NFL. Edge rusher Emmanuel Ogbah, the team’s second round pick in 2016, led the team in sacks last year and will rush the quarterback opposite of Garrett. Wide receiver Kenny Britt and guard Kevin Zeitler, acquired in free agency, will come in and contribute right away. But this team still has so many holes to fill, with none more glaring than their long-term solution at quarterback (although they might have found an answer in second round pick DeShone Kizer).