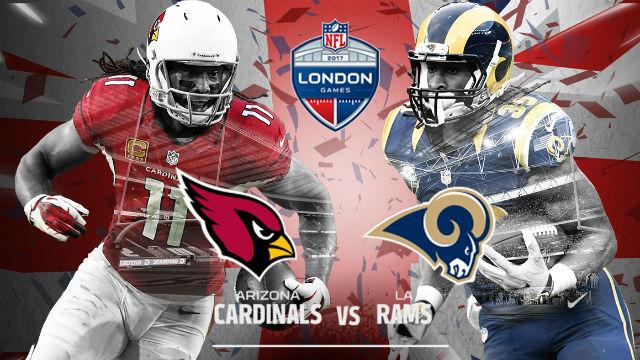 This Sunday, the Arizona Cardinals and the Los Angeles Rams travel to London for their game. NFL betting for the Cardinals vs Rams game  has the Rams as the 3.5 point favorite  with a total score of 47. However, FF-Winners AI-generated prediction (52-33 ATS this year) favors Arizona by 2 with a total of 44.

We’re now over one-third of the way through the 2017 NFL season, and the Los Angeles Rams are sitting atop the NFC West with a 4-2 record. Before the season started, if you had told any NFL fan that this is how the first six games of the season would go down in that division, they would have thought you had never watched football before.

Over the last three weeks, the Rams have been scoring an average of over 34 points per game, thanks to the innovative play designs of first year head coach Sean McVay, and the hard running of a rejuvenated Todd Gurley. This past Sunday, the Rams headed to Florida and picked up a very quality road win against a Jacksonville Jaguars team that has been one of the more fun stories in the NFL this season. The Rams put up 27 points on a team that was holding opponents to less than 17 points per game this year.
This Rams team looks like it’s legit. If they can get a defense that’s ranked 27th in the NFL in opposing yards per game to come together, this could be a fascinating team to watch down the stretch of the season.

After a big win against the Tampa Bay Buccaneers last week, the Arizona Cardinals seemingly got their season back on track, pulling back to a 3-3 record halfway through October. They’ll travel to London this week to take on the Rams, hoping they can snap the trend of playing poorly away from home; they’re 2-0 at home this year, and 1-3 on the road.

Expect the Cardinals to feature another heavy dose of the newly acquired Adrian Peterson, similar to what they offered Tampa Bay last week. Peterson went for 134 yards rushing and two touchdowns last week, looking reminiscent of the Peterson we remember from five years ago. This week, he — and the Cardinals — will face a Rams defense that’s 29th in the NFL in rushing yards allowed per game, while allowing an NFL-high eight touchdowns this season.

Ironically, while the spotlight was on Peterson after last Sunday’s performance, Arizona quarterback Carson Palmer also enjoyed his best performance since his MVP-caliber season in 2015, throwing for 283 yards and three touchdowns while completing 81.8% of his passes that day. He threw the ball in the direction of the guy who still might be the most reliable wide receiver in the NFL in Larry Fitzgerald, who caught 10 passes for 138 yards, and is currently 6th in the NFL in receiving yards.

It’ll be up to the Rams’ defense to keep the football away from the Arizona offense, and ensure that Peterson doesn’t slow down the game by keeping the Rams’ offense off the field. Arizona’s defense is still very talented, but the way McVay has been calling plays for the Rams, if there’s an opening somewhere, he’ll certainly find it and exploit it. The Cardinals also don’t play very well when they’re away from home, so Los Angeles has to do whatever it can to continue to make life uncomfortable for Arizona.